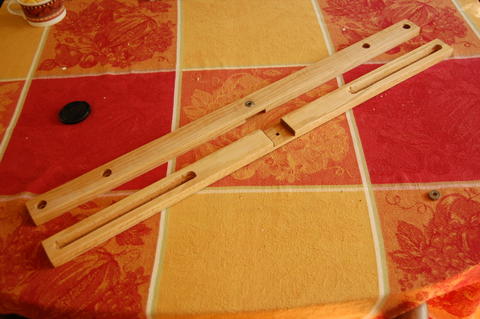 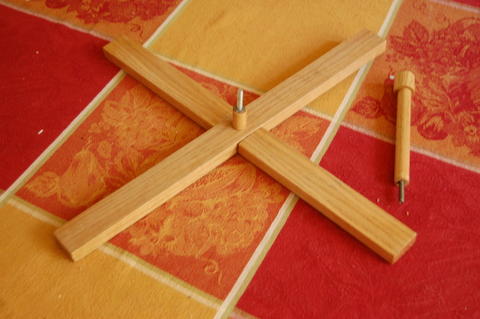 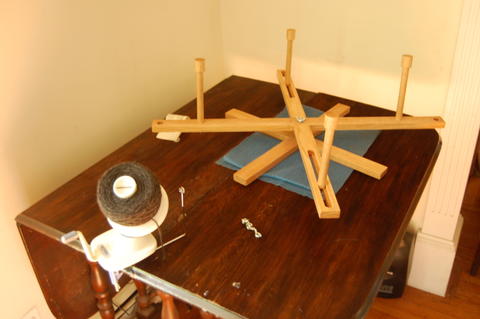 As a summer project, I'm trying to learn more about woodworking. I like making things, and woodwoorking is one more method of creating.

My mom asked me to make her a yarn swift, which is a sort of lazy susan for a skein of yarn. Often, yarn comes in skeins (loops) that become hopelessly bunched as they unwind. A ball of yarn is easier to knit with, and she has a small machine that'll wind yarn into a ball. The swift holds the yarn as it unwinds, preventing tangles.

After looking at some designs, we decided on a horizontal design, centered around two wooden X's. The lower cross would act as feet, and the upper one would hold upright dowels, which would hold the yarn. The longer arms would be 30" each (large skeins are usually smaller than two yards, and 30" arms could accomodate those.)

We decided to use a few pieces of 2x2 oak that were lying around. I started by cutting each board to the rough dimensions. The larger piece of oak split into a 30" piece and a ~15" piece; the shorter end was used for feet. I cut each board in half to make two 30x¾" boards and two 15x¾ pieces.

Half laps in each board improved the appearance and usability of the swift. I set the tablesaw blade to 3/8", and cut a 3/8x1½" slot out of the center of each piece.

We decided to use both fixed pegs (seated in holes) and mobile pegs (seated in channels) to hold the skein of yarn. The holes were incredibly easy: I drilled a 5/8" hole to a depth of 3/8" near the end of each arm. I swapped to a ¼" drillbit and drilled the rest of the way through.

The slots were far harder, as I've never used a router before. To delimit the ends of the slot, I drilled holes near the ends and the center of the arm. Using a ¼" router bit, I placed the piece on the router table, and raised the router to match the 3/8" hole depth. I lined up the fence to force the router to cut along one side of the slot, and made the cut. Then I rearranged and removed the other side. Finally, I flipped the piece over, fit the router bit into the ¼" hole I drilled, lined up the fence, and removed the final piece of slot.

Geez. That process sounds so much easier in hindsight. It took me three tries to figure out the router and cut the piece without leaving any gashes. Word of wisdom: if the router bit isn't fastened absurdly tightly, it'll work its way out of the chuck, deeper into the workpiece. Also, at the end of the cut, lift the piece straight up along the fence.

I also found the center of each half-lap and drilled a ¼" hole for a bolt. Ball bearings were countersunk into the arms to improve the mechanics.

It fit together in a dry fit, so I sanded it clean (the tablesaw was just waxed, and my wood picked up a ton of grimy wax) and put on a few coats of polyurethane with a paper towel.